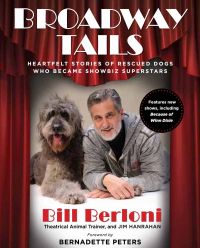 The sun always comes out tomorrow for the shelter animals Bill Berloni rescues—sometimes from death’s door—and then trains to meet the demands of the stage. Berloni was a nineteen-year-old theater apprentice more than four decades ago when he was offered his first big break: find and train a dog to appear in the original production of the Broadway hit Annie. Defying the odds, he rescued a down-on-his-luck dog from a local shelter and, together, they redefined what animal performers could do.

Since then Berloni and his trainers have provided animals for hundreds of films, commercials, and television shows, as well as live theater, including productions of The Wizard of Oz and Annie, all over North America. In this heartwarming book, he tells the true stories of “throw-away” animals who came back to work with some of entertainment’s biggest names, including Bernadette Peters, Sarah Jessica Parker, Mike Nichols, the New York City Ballet, and many more. This new edition features several new shows, including the beloved children’s classic Because of Winn Dixie.

Bill Berloni received the 2011 Tony Honor for Excellence in Theater, the first ever given to an animal trainer. He has trained animals for live performances, film, and television for more than forty years. He has also been a behavior consultant to the Humane Society of New York. 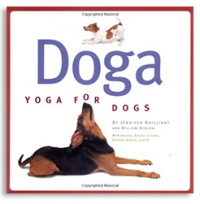 Dogs have always been natural yogis, and their tranquility of mind, ability to be in the moment, and contented outlook are widely considered to be the result of their long and devoted practice of doga. Dogis Benny, Buster, and Cricket practiced in obscurity for years, perfecting their dogic principles. Now at last they reveal the powerful secrets of doga. Many of the movements and positions of doga can inspire and assist humans in their own yoga practice. Doga presents the major asanas or postures, from the Downward-Facing Dog to the relaxing Happy Puppy and restorative Pup's Pose. Each stretch is demonstrated by one of the dogis, with accompanying text to help people adapt positions to their own practice. Also included are breathing techniques such as the hot breath, or pant, and tips on practicing with your own dogi. Anyone who does yoga or owns a dog is sure to find inspiration in these pages. On the path to health and inner harmony, Doga shows the way. 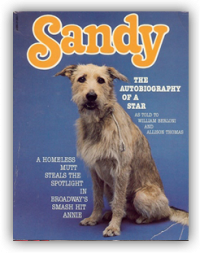 Sandy, the Autobiography of a Star

From Wags to Riches brings you into the world of award-winning theatrical animal trainer Bill Berloni. Known as a tireless advocate for animals, Berloni possesses the unique ability to transform shelter dogs into stars. Berloni's passion for animal activism has opened up the door to a pool of untapped talent, allowing him to rescue dogs and to give them a second life on stage.

Check out our books!

Everything from raising money for your charity to simply entertaining, Bill is available for speaking engagements!